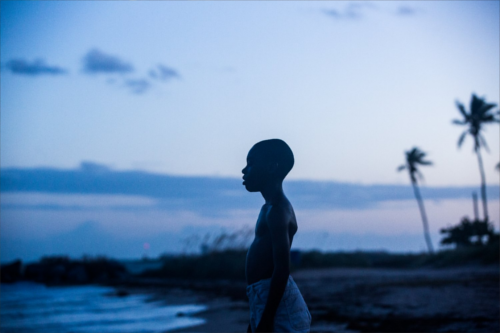 First—before you read a white person’s opinion of art about and created by black people, you should listen to a black person’s thoughts. Try this interview with young artist and co-star of Moonlight Ashton Sanders, or this review from my hometown’s newspaper, or this group discussion at The Fader.

Cool? Okay. Now for my bit.

When I first read The Lord of the Rings in junior high, a strange detail stood out to me. Over and over, the word “fair” was used to describe characters when they were introduced (along with many other adjectives, of course, because you don’t write the world’s first epic fantasy trilogy by being terse). At the time, I figured it simply meant “attractive,” since all the characters thus described were princes and Elves and other heroic, eye-pleasing types.

It took an episode of Star Trek to educate me, as it so often does. In “The Naked Now,” Lieutenant Sulu, intoxicated by a virus, swashbuckles his way onto the bridge and takes Lieutenant Uhura in his arms. “I’ll save you, fair maiden!” he cries.

To which Uhura deadpans, “Sorry, neither.”

Legend has it that actress Nichelle Nichols ad-libbed that line. Because indeed, the word “fair” has become so synonymous with “beautiful,” that even the relatively progressive writers of Star Trek missed the faux pas of using it to describe a black woman. Uhura is very beautiful—but she is not “fair.”

In Best Picture winner Moonlight (excuse me while I celebrate being able to write that phrase), young Chiron’s mentor recounts being told that, “In moonlight, black boys look blue.” As a teenager, Chiron experiences a significant encounter with another black boy on the beach at night, and the phrase comes to life. It’s something that white people might not know about black skin, a bit of visual poetry that paints its human beauty with a different color than film, or indeed any of our popular culture’s imagery, usually gives us.

Meanwhile, on any given stereotypical white gay man’s dating profile, you’ll find the standard caveat: “No blacks, no Asians,” with the equally standard: “Not racist, just a preference.” Now, as a Christian, I should be the last person to judge what’s truly in someone’s heart, but I should also be the first to examine my own.

So when I first came out and started using OkCupid, I didn’t include the “no Blacks, etc.,” boilerplate, not because it wasn’t true for me, but because it felt sketchy to say so, and I didn’t know why. And since I was coming out late in life, as a Christian, in a town with a decent-but-not-huge gay population, it seemed silly to limit my options.

Seeing Moonlight gave me the language to explain what bothered me. Because to give language is exactly what it does—cinematically and lyrically, it describes black bodies and black skin with a kind of mythical wonder I’ve only ever encountered in the poetic praises of those fair-skinned Elves and princes. Much like recent research has discovered that ancient Greeks might not have been able to see the color blue because they simply had no name in their language for it, we literally can’t see the beauty of humanity’s many colors if we have a limited vocabulary to describe it with.

No wonder many profiles declaring that only white men need apply also belong to men of color, not just white guys. Aside from crude jokes about the alleged size of their manhood, what positive language is out there to associate with? Maybe something about being virile, or aggressive, but not much tender, not much intimate, not much beautiful. Not much until Moonlight.

Back to Star Trek (and you’d better get used to that on this blog).

The resident heart-throb of Deep Space Nine was Doctor Bashir, played by Sudanese-born actor Alexander Siddig. In one of the DS9 novels (because of course I read the episode novelizations), he was described by the author as “olive-skinned.” I’d never heard that term before, but not long after, when I was in a play in college, the makeup girl set aside the palette she’d used for the other white guys in the cast and picked up a different one for me.

“Because you have an olive complexion,” she said.

She did not know what that meant, and really needed me not to talk while she worked. Admittedly, I only have a touch of olive from my Serbian half, and it’s paled over the years as I’ve spent more days indoors as an adult than I did as a kid. Still, thanks to Dr. Bashir, I enjoyed the pleasant experience of hearing a description of my skin and immediately associating it with “handsome,” and not, “different,” or “difficult.”

These days, I’m a skinny-fat, bespectacled dude who repeatedly gets compared to Seth Rogen. This is fine for my boyfriend, who thinks Seth Rogen is hot, but I am not at peace with it. Yet even though my body is not exactly strutting-through-WeHo-in-short-shorts material, it reads as white, and most guys would still give me a click over an equally qualified black guy (or would, if I were still dating; the bf and I have been together for a year-and-a-half now).

Is that racist? In the sense that swiping left on someone is not equal to burning a cross on their lawn, I guess not. But as we’ve come to learn during the history we’re living through, the idea that white persons and white bodies matter more than others manifests itself through many less overt, more everyday activities than lynching or goose-stepping. It means that beauty is consistently described as whiteness, and even if we haven’t realized that this idea shapes the world we see, it is a racist standard that sets us up for nothing but failure. 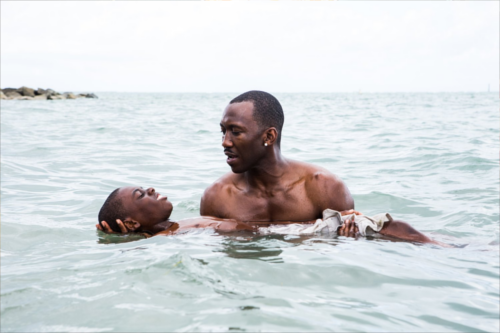 This is the magic of Moonlight, and all good storytelling, in that it rewrites our code without lecturing, without judgment, but with the power of pure empathy. It uncovers beauty in the world that we’ve closed our eyes to. And just to outdo itself, it also studies the shape of masculinity handed down from one generation to the next (yes, even to a queer boy), and weaves a romance tied together more with emotional and spiritual intimacy than with the sexual.

Moonlight wasn’t specifically made for me, as much as I may relate to its taciturn protagonist’s search for his identity, knowing that he’s different from the other boys but not knowing why. It’s firstly a cinematic gift to boys without a Dr. Bashir in their lives, whose imaginations about themselves need to be baptized like little Chiron learning to swim in his mentor’s arms. It’s also, though, an act of grace for those whose preferences have gone unexamined and un-confronted.

It’s a call and a challenge to see the humanity and beauty of God’s entire palette—black, brown, olive, and in the moonlight, blue.