I’m the second one. That white page in front of me looks so clean and pretty before I start writing, like my front yard after a snow fall (I live in LA now, after growing up in Missouri, so excuse me while I remember what snow was like). Once I set foot out there, my prints leave tracks that can’t be taken back.

So I’m prone to sitting at the window and staring at the winter, imagining what the snow could become, without ever taking it into my hands to shape it.

Unfortunately, a lot can happen to the world while you’re watching it, paths carved that should never have been made. And then you wonder what might have happened if you had gotten out there first.

Not that I’ve been completely sitting on my duff. I moved myself out to LA, after all, and I’ve come out publicly. I’ve gotten a few friendly, encouraging notes since then, and I knew I was supposed to keep writing about it, but I didn’t know quite how to approach it. Blogs and books for LGBT Christians abound these days, thank God, and I’ve no desire to waste anyone’s time by being redundant.

But I also don’t want to risk not being there when someone needed to hear from me, maybe some other kid wondering if there was anyone else like him, or anyone else willing to speak up for him. Lots of people failed to speak up this past year, and I won’t be one of them.

And if I’m being honest, there aren’t any gay Christian blogs out there that quite nail the kinds of things I want to talk about, because all of our experiences and perspectives are a little different (insert a snowflake joke here, because I can’t get enough of that snow metaphor).

I’ll try out several shapes for this blog to see what works. We’ll cover some movies for sure, since that’s my thing, and some books and other art having to do with the LGBT experience (or at least, my LGBT experience). I have lots of friends I’d like my readers to meet and listen to, so expect some interviews. If you can stomach it, maybe some theological discussion. I really love me some history, too, which helps give context to the movement we’re in. And social justice. Just, so much social justice, you guys.

In the meantime, if you’re interested in hearing from a gay Christian who grew up in the Midwest, got saved at an early age, and came out at a late one, then mine’s the story for you.

My blog’s title refers nostalgically back to an old classic of Christian literature, but it also implies constant forward movement by people who aren’t quite familiar with where they’re going. That movement take detours just by its nature. Progress requires imperfection. Let’s get messy. 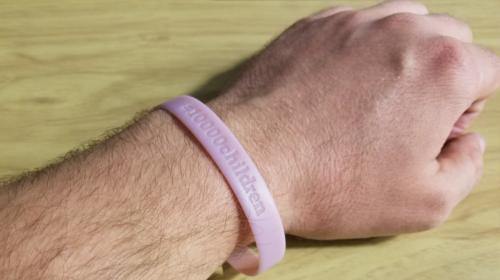 This is a wristband I wear. They’re all the rage these days. I see people walk around with half-a-dozen of them on their arms sometimes, and I wonder what all their stories are.

In March of 2014, I was only just beginning to officially call myself a gay Christian. Coming out doesn’t happen all at once, mostly because you can’t come out to the everyone in the world at the same time, Facebook aside. I was slowly testing the waters to see how people responded, and if the phrase really described me, my life, and my walk with God.

Several big stories had hit the LGBT world already in just the few months leading up to this day. Exodus International, the leading ex-gay ministry, had shut down with an apology from its founder that they had done more harm than good. Fred Phelps, head of the Westboro Baptist Church, had died. Christian churches in the US had helped support the passing of legislation in Uganda making homosexuality punishable by death.

And on March 24, 2014, WorldVision charities released a statement declaring that professing Christians in same-sex marriages that were blessed by their respective churches would be allowed to work at their organization.